How does a vape work?

What is a vape?

A vape or electronic cigarette, as it is also called, is an electronic device that simulates tobacco smoking. It consists of a tank and a power source. The tanks can either be with replaceable coils / filters, or it can be a pod. Pod are tanks with built-in coil. Instead of smoke, you inhale vapor. This means that the use of e-cigarettes is often called vaping.

How does a vape work?

A vape or vaporizer works by pressing a button which then causes the e-juice to evaporate so that you can inhale it in the same way as you do with a regular cigarette. The difference is that the liquid evaporates and not that the leaves are burned.
When you are going to buy an e-cigarette, you can either buy a mod and tank separately, a complete package of mod and tank, or pod system. A pod system has simplified some of the vaping by simply inhaling without having to press a button, and you replace the entire pod when it is worn out instead of having to unscrew the coil that is inside the tank. These pod systems are also usually very much smaller in size.

What does e-juice consist of?

E-juice, also called e-liquid or vape liquid, consists of PG (propylene glycol), VG (vegetable glycerin) and flavor essence. PG is the substance that emphasizes the most taste in e-juice, it makes e-juice a little “sharper”, and is also quite thin. VG is what creates most of the vapor, is a little sweeter, and is also thicker.
The e-juices come in different mixing ratios, it is normally at 50VG / 50PG – 80VG / 20PG. There is usually always more VG than PG in the e-juice. This also makes the e-juice a little thicker, and that you do not get too much of the sharp feeling when you steam.

Components of a vape 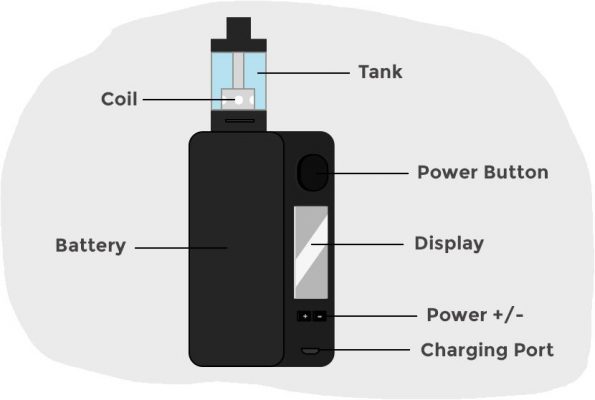 You will find all our products here: Mods, Tanks, Coils and Batteries

We hope this guide has been helpful! If you have any questions, don’t hesitate to Contact us.